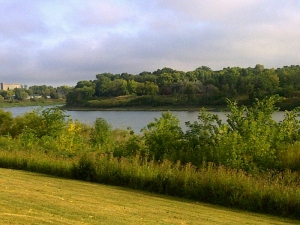 The river outside my door runs northward. Sort of. That is, it starts to the south of here and ends up to the north of here, but along the way it does a lot of meandering to the east and west, and even the odd little southward switchback as it follows the path of least resistance along the gently sloping prairie. From where I live, a northward river walk begins with a stroll through a long narrow park that slopes down to my parking lot on one side, and farther down to the river on the other. The park is actually a dike, constructed many years ago to keep the river OUT of my parking lot (and my living room) during the annual spring flooding.  The dike is there for the utilitarian purpose of holding back the river – of protecting the neighbouring residents from harm, but the view from the top of the dike is spectacular, and every time I walk it I feel grateful to have stumbled on this location. 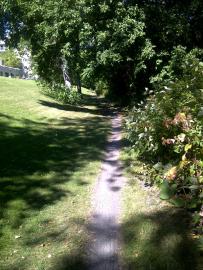 Before long, the trail dips down off the top of the dike and winds through a wooded section closer to the river. Just a narrow dirt bicycle track, the trail snakes along the riverbank and reveals the back side of a series of apartment buildings that front onto the main north/south roadway in this part of town. 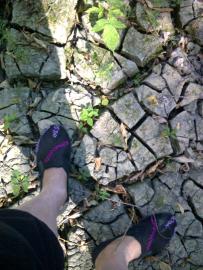 Here you do see evidence of flooding. The clay-laden soil is cracked into a grey mosaic where the river has breached its bank and deposited a layer of silt along the shore. It can be hard to get close to the water. This cracked earth is difficult to walk on, and the shore in every direction is thick with ankle-stabbing thistles. But every so often there is a path through the tangled growth down to the shore and it is possible to get up close and personal with the muddy water.

The funny thing is that I feel no compulsion to actually touch the water. And not because it’s muddy, either. You see, having grown up in a house with a backyard that went straight down to the river, it was ingrained in me from a very early age to keep a conservative distance between me and the water’s edge. The result of this highly successful conditioning on the part of my parents was that I made it to the age of majority without drowning, in spite of our lack of a fence. But now as I stand—an adult— next to the sluggish late summer water, I know that muddy shoes are my biggest risk of going right to the edge. 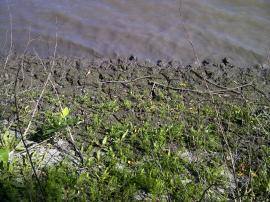 Mind you it’s not a river you want to swim in, and I know that the placid surface masks a deceptive current. The river is to be respected. But I think I have internalized a greater degree of caution than the river warrants.

And it gets me wondering about all the other protective dikes I have built around myself. And how many times I have held myself farther back from the edge than was really necessary.

3 thoughts on “I go walking: North”