I have to confess that, while I find the Daily Prompt from WordPress can be a great seed for growing a new post, I often experience a disconnect between the prompt title and the question being asked. Sometimes I just ignore one and focus on the other. Sometimes I write about my own topic. And yeah, sometimes life explodes and I don’t write at all. Today’s Daily Prompt is creating so much cognitive chaos for me that I am compelled to address it here. The prompt, titled “Placebo effect,” asks: “If you could create a painless, inexpensive cure for a single ailment, what would you cure and why?  Photographers, artists, poets: show us HEALTH.” 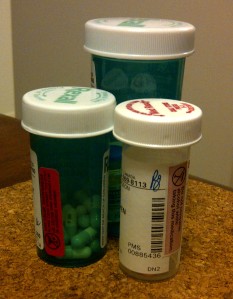 There is so much about this prompt that doesn’t sit right with me, I hardly know where to start. I’m going to have to deconstruct it one piece at a time.

In the first place, as a title to the rest of the prompt, “placebo effect” doesn’t make sense. The question is about curing an ailment, but I wouldn’t necessarily equate “placebo” with “cure.” That’s not to say that a placebo can’t play a role in curing disease. The placebo effect is an observable phenomenon that has been extensively researched.  But there is no consensus about what causes it, except for some acknowledgement that it has something to do with the complex way the human mind and body interact. By that token it would seem be a stretch to say that a placebo could “cure” a particular disease. If the effect of a placebo is in some way linked to the workings of the mind, then I don’t see how it could ever cure a specific physiological disease in patients who were psychologically and cognitively diverse.

Secondly, I’m put off by the emphasis placed on the fantasy cure being “painless,” as though a cure that isn’t painless would be less desirable. How do you measure pain? Which pain is worse– a low grade pain that goes on, day in and day out, for years — or a few days of acute pain managed medically? Surgery is a cure that always causes some pain, but I jumped at the opportunity to cure my chronic hip pain with hip replacement surgery. Would it have been better if there had been no post-surgical pain at all? Given that I didn’t need pain killers of any kind two weeks post-operation, I have to say that the fact that there was any pain at all was pretty much inconsequential to the big picture. And I believe that what bit of pain I did experience served an important purpose. Pain is a warning– it is our bodies telling us to take it easy. If my post-surgical pain is my body’s way of telling me to slow down and rest while my system recovers from the trauma of surgery, I am not sure I want to wish that away.

And then there’s the complicated matter of “inexpensive.” As a consumer of the Canadian heath care system, I experience most of my health care as relatively “inexpensive.” But as a citizen who is aware that a massive percentage of my provincial government’s budget is dedicated to that health care system, I know that it is, in fact, very expensive. I’m not at all qualified to comment on the brouhaha going on south of the border with regards to paying for health care, but I know that people everywhere would dearly like to find more inexpensive approaches to medicine. But “inexpensive” can be a just as relative a term as “pain.” My surgery was probably more “expensive” than several years of daily acetaminophen, but I don’t know how the equation works out if you factor in the improvement to my quality of life and general productivity level.

And while we’re at it, let’s talk about “cure.” Or rather, do we only want to talk about “cure?” What about “prevent?” If we decide that “painless” and “inexpensive” are both desirable, I suggest that the odds of achieving both are much greater if our goal is not to cure the disease once it happens, but to stop it from happening in the first place. And what about the third option: “manage.” In the musical Rent the characters, many of whom are grappling with HIV-AIDS, sing with hope about “living with, not dying of, disease.”

There are many diseases that, while we have not cured them, we have learned to manage to the extent that people can live long and productive lives with conditions that were once a death sentence. My great-uncle died at age 12 of diabetes, a few months before Banting and Best discovered insulin. Today it is possible to manage diabetes into old age.

Which brings me to the utter and complete impossibility of choosing one ailment to which I would apply this fantasy cure. Because really how would you choose? Would you base your choice on the number of people afflicted? On the amount of suffering caused? On the cost to the medical system for the treatments that are currently available? Or would it be an emotional decision based on your own experience? I have arthritis. I lost my dad to cancer. I have loved ones with heart disease, depression, diabetes,… the list goes on.

In the end, my biggest beef with today’s prompt is with the implication that curing a disease means the same thing as “health.” Because one thing I have come to know with absolute certainty is that heath means a great deal more than the absence of disease.

For me, health is an integration of mind/body/sprit. It is wholeness, in the sense that all the parts of me are complete and complementary. It is, to use the familiar words of the serenity prayer, about changing (“curing”?) the things that can be changed, accepting the things that can’t, and having the wisdom and self-assuredness to know the difference.

Which means that I can be completely free of disease, and not be healthy. And likewise, I may be living with all manner of incurable disease and be healthy in the way that I choose to live with and through my physical realities. True health is personal. It is mysterious. It is full of contradictions.

Kind of like writing a thousand words about why I can’t write about the Daily Prompt.

17 thoughts on “A healthy dose of disagreement”