I remember one really great New Year party. I was in high school, and we were visiting my cousins. The party was great for a lot of reasons. I thought my cousin and his friends were cool. We were in a strange city, so none of the people at the party knew me. (As in, none of the people knew that I wasn’t cool.) And all the parents had gone to a party at another home, which made it a cool party even if nothing terribly wild happened.

There were other parties, some  “cooler” than others. But mostly, when I think of New Years past, I think of rented movies (remember those?), pajamas, and takeout Chinese food.

One year when my eldest was small we got ambitious and went downtown to see the fireworks. We found a vantage point close to the action , which proved to be a spectacular judgement error. The toddler was TERRIFIED of the noise, but because we were at the very front of the crowd it was difficult to move back to a lower decibel location. I spent the whole show with my mittened hands clamped over the ears of  a sobbing child.  After that we went back to celebrating at home. Over time, Chinese food was replaced with things the kids would actually eat, and rented movies gave way to whatever family-friendly specials happened to be on TV.

One New Year when the kids were too young to stay up late, but old enough to negotiate, we were suckered into allowing them both to stay up until midnight. We all piled on the big bed in the master bedroom to watch TV. Both girls decided that the most comfortable seat was on Mom, so I spent the evening fighting to maintain some circulation in my legs, and some peace between my daughters.  The later it got, the less charming my overtired offspring became.  Shortly before 11:00 pm, the youngest, and grouchiest, child left the room for a bathroom break. While she was out of the room we hastily located a channel from a time zone one hour later and swore her older sister to secrecy with the promise that, if she didn’t rat us out, she could stay up until it was really midnight. When daughter #2 came back into the room, the TV was counting down to midnight. The con succeeded, and she was out cold in her own bed by 11:08, satisfied that she had achieved her goal. 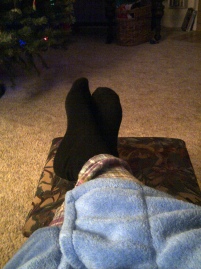 As my children grew into their teens, my New Years evolved . Some years my role was to be home waiting for the call to pick them up from their festivities. I did manage one year to go to hear a friend’s band, but for the most part my New Years are quiet. Mostly that suits me just fine. This year I don’t even have any pickup duties. I might watch a movie or curl up with a book. I’ll stay up until midnight, but then I do that regularly. I will actually enjoy the solitude.

New Years Yet to Come

But lately it has occurred to me that I may have erroneously left the universe with the impression that solitude is all I enjoy. That I wouldn’t ever be interested in a big noisy party. It’s true that there have been lots of years when a quiet night at home truly appealed to me. But I have a secret to confess.

8 thoughts on “A New Year Carol”