A few year ago, when the design for Winnipeg’s new airport terminal was in the consultation phase, the citizens of the city spoke fervently about not wanting to lose the iconic escalator where they had greeted their loved ones for decades. The design team took heed, and replicated the escalator in the design for the new terminal. Everyone who arrives on a domestic flight makes a grand entrance at the top of this escalator, and hopes to be met by someone special waiting at the bottom. The escalator is, in many ways, Winnipeg’s official symbol of coming home.

Today it was my daughter coming home—back in town after four months away at school. She was excited to be coming back to reconnect with friends and family over her holiday break. I was equally excited to be meeting her.

I like airports. I like people watching in airports. I like the shiver of anticipation that vibrates through the crowd—the undercurrent of anxious excitement that swirls around those who are coming and going and waiting.

Of course the problem with people is, well, some of them are better company than others. I sat down on a bench to wait and was promptly subjected to overhearing a racist tirade by the middle aged white woman across from me–something about aboriginal Christmas Hamper recipients who “take advantage.”

I wish I was better at delivering snappy comebacks to strangers. As usual, I just felt silently ill.

I’ve been immersed of late in the reports of the Truth and Reconciliation Commission—struggling to wrap my head around the appalling manner in which the first residents of this land were treated by a group of newcomers. Wearing my lifelong privilege with increasing discomfort. Finding myself more and more intolerant of intolerance.

Unwilling to remain in earshot of my racist neighbour any longer, I vacated the bench to wander the increasingly crowded waiting area. Evidently someone else of significance was expected at the top of that escalator. By the time the arrival board announced that the plane had landed, the waiting area at the foot of the escalator was filled with TV cameras, reporters with microphones, and people holding up “Welcome to Canada” signs.

My daughter was one of the early ones off the plane and down the escalator, and we watched together as her celebrity travelling companions made their grand entrance—a Syrian refugee family arriving to be greeted by their Manitoba sponsors. 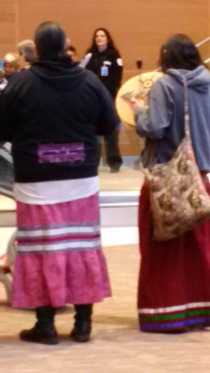 And then, out of the crowd emerged the drummers. I had read earlier that, across Canada, Indigenous people were making plans to extend a special welcome to the newcomers. Still, witnessing it first hand caught me off guard. I fought back tears as the group of women stood at the foot of the escalator and drummed and sang a welcome ceremony, their chants echoing through the massive arrival hall.