Eleanor Roosevelt said, “Do one thing every day that scares you.” I’ve always felt that was a good principle to live by. Which is why, on my outing to the amusement park yesterday with my sister’s family, I decided it was time to try this ride for the first time: 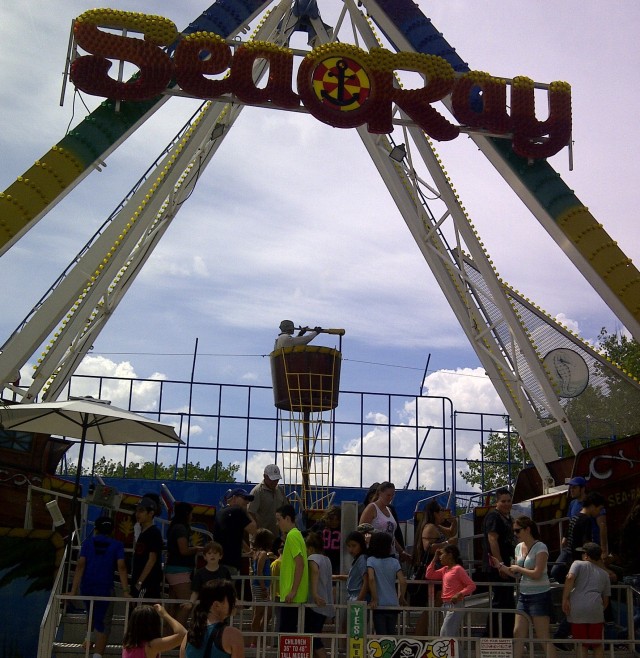 Did I say the first time? I also should have said the last.

OK I guess it wasn’t that bad. I understand the physics of it enough to know why one should be able to expect NOT to become airborne at any point. And I figured if my small niece and smaller nephew were managing not to be flung into orbit around the sun, the odds were good that I too would live to see another day.

There was, however, the added factor that said niece and nephew had decided we needed to sit in the very end. That would be the part that swings up the highest. Now I’m truly not scared of heights. What I am scared of is falling, and the sensation that one might fall. And, as I discovered when it was far too late to change my mind about the whole affair, when this particular ride is in full swing there is a moment when the centrifugal force that is holding one in place flirts with the competing gravitational force that is seducing you earthward, and you do actually rise ever so briefly from your seat and hover Wile-E-Coyote-style in mid air for a split second before swinging back down.

In my effort to do the thing that scares me, I have engaged in all manner of difficult conversations that had the same effect on my stomach as that moment when the Sea-Ray hovers at the top of its swing. I suspect that those risky conversations are actually more along the lines of what Roosevelt was really contemplating than the pendulum-pirate-ship-of-doom.

Which suits me fine, because it means that I need not feel obligated to get back on the Sea-Ray or any of its ilk!